My case has already settled. I'm not happy with the compensation I've received. 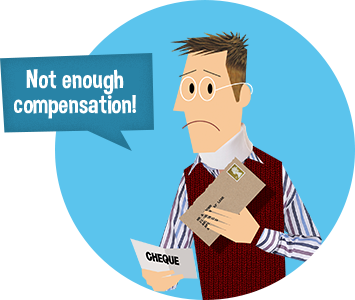 In this case, if you feel your claim was not properly handled and the compensation you received was less than you expected, or not awarded at all, you can ask for us to investigate your claim. You may be able to benefit from having your case re-opened and you could receive further compensation. Your previous case handlers could be ordered to pay extra compensation if they have negligently or carelessly under-settled your case. We can go back up to six years in these cases.

Peter suffered a serious injury in an accident at work. His case settled, but Peter didn’t feel this was a reasonable amount given the injuries he’d sustained.

Peter felt he was unable to carry out his duties satisfactorily as a result of his injuries, later causing him to resign from his team leader position. Peter instructed a local solicitors to take on his case and it settled for £18,000.

Review My Claim reviewed Peter’s case and noticed a number of shortcomings made by his solicitors. We took on the case, consulted the correct medical experts and obtained extra medical evidence.

Ready to get started?

However your accident was caused, your claim can be reviewed by us free of charge. For every case we take on we give £10 to each of our chosen charities;

or call us on